A marine biologist is trying to restore lost reefs in the waters off south-east Queensland, by supplying locals with bags of native oysters. 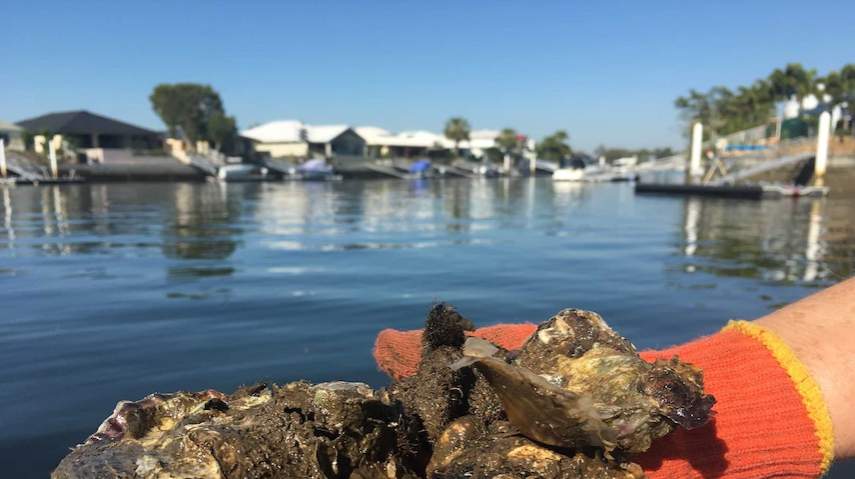 Ben Diggles from Restore Pumicestone Passage said the area used to have large sub-tidal reefs, but many had been lost through urban development and increased sedimentation of the waterways.

“We’ve got around 30 oyster gardens at Bribie Island at the moment working on this program and it’s the first one in Australia,” he said.

Bags of oysters are given to residents who live on the canal, to grow off their pontoons.

“Once we have got them to a size where they can fend for themselves, we are going to move them out on to some experimental shellfish reefs that we’re currently planning, which we’re working with authorities on,” Mr Diggles said.

Mr Diggles said given the amount of canal estates along the south-east Queensland coast between Noosa and the Gold Coast, projects like Restore Pumicestone Passage were important to improve the quality of the water.

“I suppose it is a symptom of the times, a sign of the relentless development we have had in south-east Queensland,” he said.

“It is a double-edged sword because there are some positive benefits [of canals] in relation to increasing the surface area of some of the estuaries.

“But there are also negative effects relating to declining water quality, which affect a large number of marine animals.

“It is similar to the situation with koalas on the land — we see koala habitats getting fragmented leading to problems with disease and populations declines.

“But because a lot of the problems are under the water they are out of sight out of mind.”

‘They do nothing to restore it’

Bribie Island resident Steve white signed up to become an oyster gardener because he didn’t think enough was being done to improve the health of Pumicestone Passage.

“I love to see someone take action to try to improve the environment and the passage, rather than monitor its destruction,” he said.

“Government and local governments seem to do is encourage development [in areas] where there is no infrastructure.

“The development just means more damage to the passage, the reefs and the marine environment and they do nothing to restore it.”

“We have some disease problems in Sydney rock oysters so I’m looking at something that I don’t think has been tested scientifically before,” he said

“We are placing a more biodiverse system of oysters by mixing the Sydney rocks with hairy mussels and the leaf oysters, to see if we can improve the survival of the Sydney rocks.

“The theory is the other oysters filter out the infected stages of the diseases, but it has not been done before.”

The project has been financed with funds from Landcare Australia.